The hip joint is the most intricate joint in the body, surrounded by a multitude of muscles. If these muscles become too tight, movement is restricted and after a while inflammation can occur. To maintain healthy hips it is crucial to have both strong AND flexible muscles.

Here are a few exercises that will help maintain optimal function of your hips:

A very simple yet effective exercise. Lying on the floor with the heels close to your hips and pushing the hips up until you reach a straight line from knees to shoulders, then bringing the hips back down with control and starting over. When performing this exercise, you might feel the back of the thighs working more than the buttocks themselves. To avoid this, lift the toes off the floor, only resting on the heels, and priceofcialis.com push the knees out during the entire movement. Also make sure to squeeze the bum at the top of the movement.

In order to keep the lower back safe, it is crucial to tuck the tailbone under and contract your abs throughout the movement to prevent your lower back from arching. If you feel any tension in your lower back, stop and adjust the position of your pelvis/tailbone and lower back. If the tension persists move on to another exercise.

If the bridge doesn’t represent much of a challenge, one can progress to the single leg bridge: The principle is exactly the same, except you are standing on one leg and the other leg is extended as straight as possible pointing towards the ceiling.All the previous guidelines about the lower back apply to this exercise as well. With both exercises, breathe out as you push the hips up and breathe in as the hips lower.

This exercise is going to focus on the outer part of the buttock (right side on the pictures). Lying on the side (left side in the pictures) hips on top of another head resting on arm or cushion (left arm on the picture). Lift the top leg at about hip level, and keep moving the leg up and down in a small movement, keeping the leg at or above hip level throughout the exercise. It’s paramount to keep the hips on top of another, not rolling back or forward. To make the exercise slightly harder turn the toes towards the floor and draw small circles with your heels.

Performing a figure 4 piriformis stretch will prevent any unwanted tightness in your hips: Lying onto the back, crossing one ankle (right ankle in the picture) across the opposite knee, and gently hugging and pulling the supporting knee towards your chest (left knee in the picture), holding on to the thigh with both hands. The upper body is relaxed and the shoulders are down on the floor. Starting with one knee down, the other knee bent at a right angle. First, tucking the tailbone under, pushing the hips forward and bending the non-supporting knee (left knee on the pictures) forward over the toes. The goal is to feel a stretch along the front of the hip on the side of the supporting knee (right hip in the pictures.). To increase the stretch, one can reach up, either with one or both arms, and reach to the opposite direction of the hip being stretched (towards the left in the pictures.). The main benefit of this stretch is to stretch the muscles at the front of the hips that are usually tight due to the important amount of time we spend sitting down. 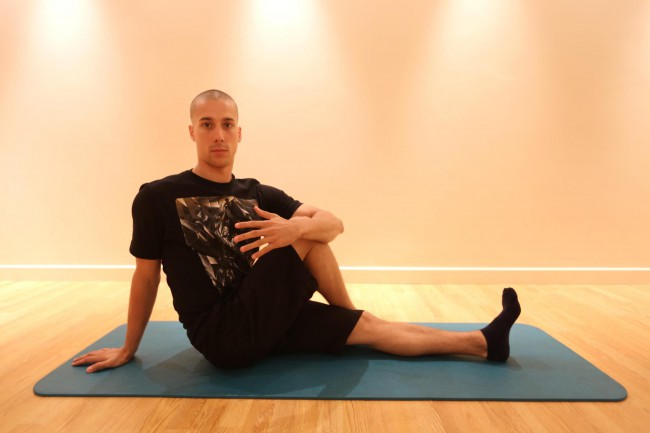 The TFL (Tensor Fascia latae) is a muscle that performs a lot of different actions and that is at the source of most hip issues. It is usually tight, so stretching it is a priority to avoid hip issues.

Crossing the leg of the side you want to stretch over the opposite straightened leg, and pulling gently that bent leg toward the opposite shoulder, feeling a nice stretch at the very base of the thigh toward the hip. Hold for at least 30 seconds on both sides. 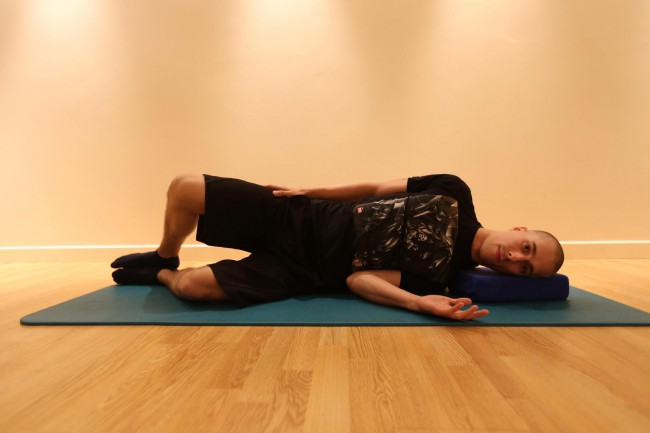 Lying on your side with the knees bent at a right angle, and hips slightly bent as well. Lift and lower the top knee as if you were pushing against resistance. Again make sure to work both sides 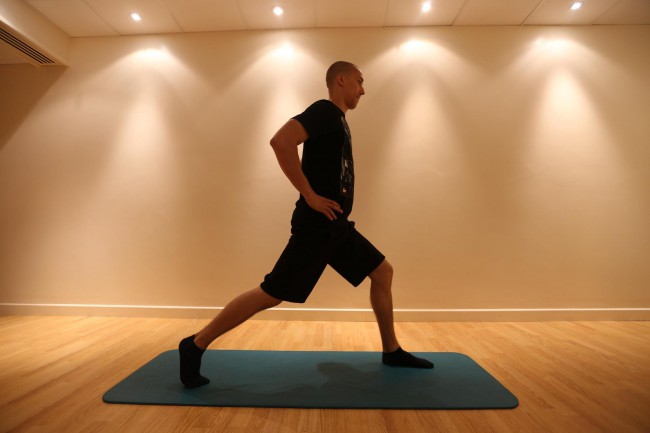 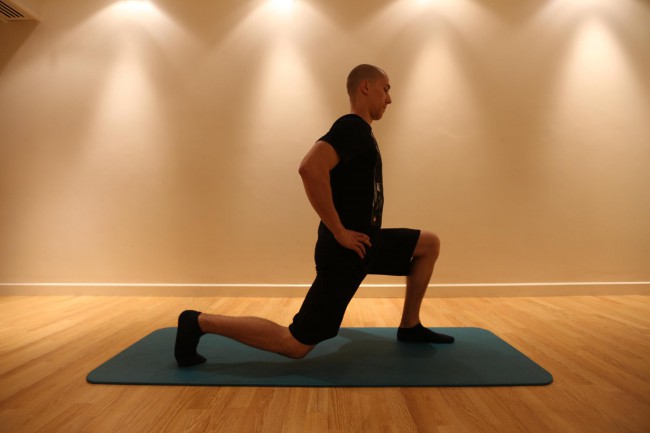 If possible, perform the lunge facing a mirror to keep the trajectory of your knee in check. Take a staggered stance, with the back heel of the ground and drive the back knee down towards the ground just before it actually touches the ground and then come back up pushing off the front leg, hands on your hips, standing straight with a proud chest. Both knees should be at a right angle at the bottom of the movement.

Routine:
Chose at least one stretch and one strengthening exercise and perform it for 2 minutes per exercise everyday.

Example: TFL Stretch 2×60’’ each side, single leg bridge 2×45’’ each side.
Make sure to rotate through all the different stretches and strengthening exercises through the week.

How to tighten your Tushy