Stretching your tight Hamstrings may not be the answer 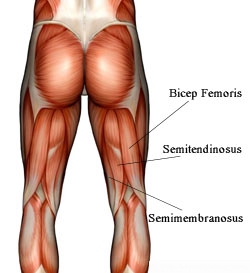 The hamstrings are a group of muscles that most of us feel are always ‘tight’. We tend to have ‘tight’ hamstrings in this country due to work habits and a tendency to never stretch after a physical workout. For those wondering what and where are our hamstrings? Well they are a group of three muscles in the back of our upper thigh that attach from the bottom of our pelvis and attach to the top of our shins. The three hamstrings are semitendinosus, semimembranosus and biceps femoris. Semitendinosus and semimembranosus both attach to the inside of our knee at the top of the shin and biceps femoris attaches on the outside of the shin.

How flexible should my hamstring be?

A rough guide to how flexible our hamstrings should be is if we are lying down and we lift one leg directly up at a 90-degree angle at the hip – no knee bend is not too bad, if you can get further then great!

Are our hamstrings actually tight in nature?

In a lot of cases it’s not always our hamstrings that are causing their apparent tightness. There are a few factors that can affect our hamstring tightness; a major one is actually the hip flexors on the front of the thigh. If the hip flexors are tight they alter the position of our pelvis so that the hamstrings are lengthened more than usual even from a standing position, so when we stretch we feel the tightness come on quick. Hip flexors being tight is generally down to too much sitting down at desks or at home in front of the TV where they are never fully lengthened causing a domino effect on your body.

Another reason we can feel hamstring tightness is due to the sciatic nerve being tight. Again this is quite common in modern society and we can often feel sciatic nerve tension with various exercises that we do in our Pilates classes. Exercises such as elephant when we cue ‘point your toes up’, you feel the stretch deepen not because the hamstrings have changed length but because the sciatic nerve has been placed under more tension which can mascaraed its self as hamstring tightness. In the same way during ‘forward reach and row’ when you again point your feet up to the ceiling. Repeating exercises where you stretch the sciatic nerve is the only way to lengthen the nerve which takes significantly longer than lengthening a muscle as they’re not so responsive but you just have to stick with it repeating the exercises spoken about above!

Practice the Roll Down @ Home